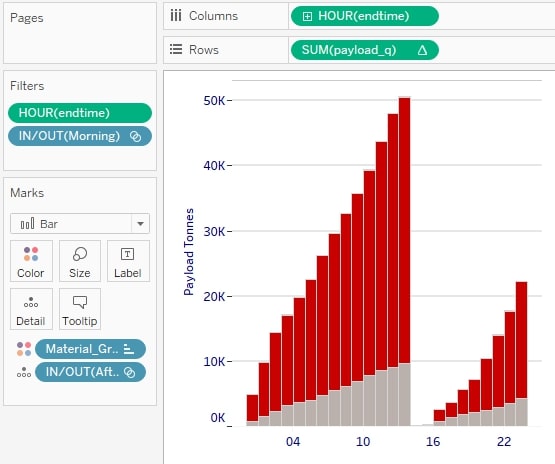 As we have written about before, the end of life for SAP Business Objects Dashboards (Xcelsius) means that many sites running Cat MineStar and SAP Business Intelligence platform are now scrambling for a replacement dashboarding tool.

Back in 2018, we blogged about our plans to evaluate migrating SAP BusinessObjects Dashboards to Tableau. A few months on, we’d like to discuss our initial findings – with a focus on transformation and migration of Cat MineStar Fleet and Health dashboard previously built in SAP Business Objects Dashboards.

How Do We Think Tableau Compares to SAP Dashboards? Very well indeed.

Tableau is a fairly new player in the BI dashboard market – something it uses to its advantage with a sleek modern appearance and a fresh outlook on ways of data visualisation. Whilst other BI programs have key functions hidden away in toolbars and drop-down menus, Tableau’s interface allows for a graph to be created using intuitive drag and drop features.

Typical dashboard components that we historically (heavily) utilise are all possible in Tableau. This essentially means that Tableau can be used to deliver some of our popular MTS BI solutions such as planned production vs. Cat MineStar Fleet actual tonnes, short interval control for mine ops and of course asset health.

An area where Tableau excels is through its powerful drill-down capabilities that can handle pretty significant volumes of data (or certainly enough to handle a typical mine operations dataset).

We have found the drill-down tools particularly useful for analysis of Cat MineStar Health data where, for example, we may start from a high-level view of health event counts. The ability to then dive deeper with a few mouse clicks is a significant time-saver.

It has therefore become a perfect replacementfor SAP Business Objects Explorer (This tool used heavily by many of the sites we support is now also end-of-life.)

Tableau is also superb at quickly comparing data at varying grains of detail. It is easy to filter, include/exclude and drill down to different levels of detail, allowing for a comprehensive view to be easily obtained. An example of where this can be used for Cat MineStar Health reporting is looking at hourly Health Events; and then quickly “zooming out” to look at specific assets, events by days, weeks, months and even years.

Tableau has a Large Pool of Online Resources

Another significant advantage is Tableau’s online presence in communities including forums, bloggers and an easy-to-access knowledge base. These channels are invaluable for providing great support and ideas. SAP Business Objects used to have similar-sized communities but they have both shrunk and reduced in quality considerably in recent years. Today finding even basic information can be time-consuming compared to Tableau’s easy to navigate pages.

One feature that we have yet to fully utilise in Tableau is ‘Stories’. This is where a sequence of visualisations work together to convey information – like a PowerPoint presentation but with less animation and block text. Although stories wouldn’t be an effective way of demonstrating fleet reporting in the short term on a shift by shift basis (that’s what dashboard features are for), in the longer term it could be a great way of demonstrating trends on a macroscale within the fleet. This could be great for quarterly reporting on the progress of medium to long term planning as well as tracking the progress and results of change management.

One area Tableau slips up, is making something that could be a relatively simple task, fairly complicated.

A prime example of this is conditional formatting. In other BI software, columns can be easily formatted with a click of a button, however, in Tableau no such button exists, instead the process takes several lengthy steps.

Tableau does not have as advanced a semantic layer management tool as something like SAP Business Objects with its universes. (Note: A poorly written universe is a nightmare. A well-written universe can help to drive fast and reliable reporting).

In Tableau, data has to be well-formatted and prepared prior to creating dashboards. Fortunately, MTS have a lot of experience with database preparation, especially when it comes to the reams of useful, and often underutilised data, generated in Cat MineStar. So in short, we find this manageable. Tableau is rapidly developing so we are pretty confident that this part of the product will mature in the coming years.

Is There a Downside to Moving to Tableau?

Yes but it’s not a show stopper. Essentially SAP Business Objects reporting is still a top class product and far exceeds Tableau in this area (as of right now anyway). It will thus be highly likely that many sites will need to maintain both an SAP Business Objects (for reporting) and a Tableau environment for dashboards/analytics. This is less then optimal.

Our other comment is that for sites that do not have the resources to do lots of analytics, Tableau is perhaps a bit of overkill when only a simple dashboard is required.

We had initial reservations about the ability to transfer existing dashboard functions over to Tableau; however, it has proven more than capable of replicating the graphs, tables and even the controversial gauges, previously built in SAP Business Objects Dashboards (and much loved by our customers!).

Tableau is therefore a viable long-term solution and we expect it to become a commonly deployed product at many mines over the coming years.

Footnote: Are MTS exploring other alternatives?

For larger mining houses running FMS, it is a great choice. For smaller, more budget constrained site (or simply those wanting a basic dashboard vs. an analytics tool), Tableau is possibly just a bit too much.

With this in mind, MTS are currently looking at further alternatives.

More to come on this 🙂

We hoped you enjoyed this MTS blog. For a demonstration of how Tableau can help your site utilise MineStar System data more effectively, drop us a line here.